Rabies is a viral disease that can infect all warm-blooded animals, including cats and people, although some species are somewhat naturally resistant to the disease. When signs of rabies occur, it is an almost invariably fatal disease. Rabies has been recognized and described since approximately 2300 BC.

How widespread is rabies?

Rabies occurs in every continent except Australia and Antarctica. Most countries are affected. The majority of countries that are rabies-free are islands.

Countries or islands that are currently accepted rabies-free are: 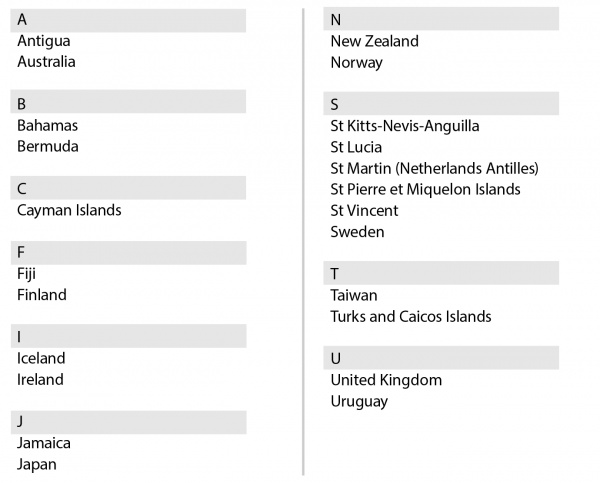 How is the virus transmitted?

Rabies virus does not survive long outside a mammal's body. Since the virus can be shed in the saliva of infected animals, the virus is usually transmitted when the saliva of an infected animal is introduced beneath the skin of a bite wound. In North America the skunk, raccoon, fox, and bat are important reservoirs for the virus, whereas in Europe, foxes are the main source of infection for people and other animals. In Asia, Africa, and Latin America the main reservoir is not wildlife, but stray, free-roaming dogs. In these areas, human infection is more common.

How long is the incubation period between a bite from an infected animal and the appearance of symptoms in the cat?

This can vary from ten days to one year or longer. Incubation in the cat is generally less than in the dog and is typically three to eight weeks. Death usually occurs within ten days from the first onset of signs.

The speed at which clinical signs develop depends upon:

1.  The site of infection. The nearer the bite is to the brain and spinal cord, the quicker the virus reaches the nervous tissue and causes symptoms.

3.  The amount of virus injected by the bite. Rabies virus is not always present in saliva of an infected animal.

"Rabies virus is not always present in saliva of an infected animal."

What are the clinical signs of rabies?

Following a bite or scratch from a rabid animal, the disease progresses through three stages:

1.  In the first or prodromal stage, there is a marked change in temperament; quiet cats become agitated and can become aggressive, while active extroverts may become nervous or shy.

2.  This phase is then followed by so-called furious rabies that is by far the most common type observed in the cat. During this phase, excitement predominates and it is at this stage that the cat is most dangerous, both to other animals and to the owner. The cat becomes increasingly nervous, irritable, and vicious. Muscle spasms will often prevent swallowing and there is excessive drooling of saliva.

3.  The third stage is the paralytic stage, which usually occurs after about seven days. Ultimately the cat will become comatose and die.

A noted feature of rabies in cats is the widely dilated pupil throughout all stages of the disease.

How is rabies diagnosed? 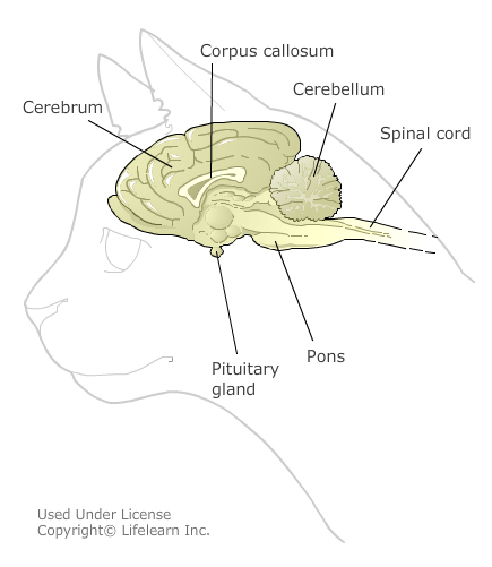 "Rabies can only be diagnosed by direct examination of the brain."

Rabies can only be diagnosed by direct examination of the brain. It is not possible to diagnose this disease in a living animal. If there is a high suspicion that the animal has rabies, or if an animal showing symptoms of rabies dies suddenly, your veterinarian may recommend submission of the appropriate brain samples for testing.

Is it possible to survive a bite from a rabid animal?

In some cases, there is no rabies virus in the saliva at the time the rabid animal bites another. In this situation, the bitten animal will not develop rabies. However, once the symptoms of rabies develop, the disease will almost invariably progress to death.

"It is possible to interrupt the progression from an infected bite to the onset of signs by the early post-bite use of anti-rabies serum."

There are very rare and poorly documented cases where people or animals have recovered. However, as Louis Pasteur was the first to show, it is possible to interrupt the progression from an infected bite to the onset of signs by the use of early post-bite anti-rabies serum. This antiserum contains specific immune antibodies to the virus. The most important method for preventing the progression of rabies is by administering an immediate dose of rabies vaccine. The vaccine stimulates the bitten animal to develop its own neutralizing antibodies to the rabies virus.

"The anti-rabies antibodies produced by post-bite vaccination are only effective if administered before the rabies virus enters the nervous system."

The anti-rabies antibodies produced by post-bite vaccination are only effective if administered before the rabies virus enters the nervous system. Once in nerve cells, the virus spreads along the nerve fibers, where it is protected from antibody attack. Therefore, the early use of vaccine is important in people that are exposed, or potentially exposed, to a rabid animal. Of course, for people that are likely to be exposed to rabies because of their career, such as veterinarians and wildlife control officers, it is preferable to be vaccinated in advance.

Because of the potential risk to people, an unvaccinated exposed cat that has bitten or scratched a human should not normally be given either antiserum or vaccine, because it may mask signs of infection. If there is a high probability of exposure, the safest policy is to euthanize the animal; the alternative is strict quarantine for many months.

If the exposed cat has previously been vaccinated then a booster vaccination is indicated followed by a period of at least thirty days of quarantine and careful observation.

What is the treatment for rabies?

There is no treatment for a cat with rabies infection. If rabies is suspected the cat has to be kept in quarantine and prevented from escaping or injuring someone. Your veterinarian is required by law to notify the animal disease regulatory authorities.

Can I catch rabies?

Yes, the disease is zoonotic, meaning it can be transmitted from an animal to hummans. However, it is only transmitted by the bite of a rabid animal. The virus is present in the saliva of the infected animal only for a limited time.

"...seek the advice of a doctor without delay."

If you are bitten by any animal that may be rabid, you should immediately wash the wound thoroughly with soap and water and seek the advice of a doctor without delay. Suspicious animals include stray or feral dogs or cats and any wild animal, particularly if the animal is showing unusual behavior such as lack of fear of people, excessive salivation, or aggression.

In February of 2018 the World Health Organization issued a new rabies vaccination and post-exposure recommendation. Those who have been bitten and have not previously been vaccinated for rabies should receive immunoglobulin (antibody) promptly, followed by a series of vaccines. Those previously vaccinated do not require immunoglobulin, but will still receive several vaccines again the virus.

Should my cat be vaccinated?

Are there any ill effects from rabies vaccination?

Rabies vaccines are safe and there is no risk of the vaccine causing rabies. The formation of lumps or cancers (sarcomas) has been associated with some types of killed vaccines in the past, but these cases are extremely rare. Safer vaccines that are less prone to creating tissue reactions are available, so talk with your veterinarian if you are concerned with this remote possibility.

As with all vaccines, the individual cat may show some transient mild side effects in the day or so following vaccination. These may include some lethargy and inappetence. If your cat shows more pronounced signs including difficulty in breathing this could indicate an allergic reaction to one or more components of the vaccine and you should call your veterinarian at once.

© Copyright 2018 LifeLearn Inc. Used and/or modified with permission under license.